The manufacturer of Indus GT disc drive, shortly before ending its production, offered Indus RamCharger expansion card together with an adapted CP/M system. The system used the drive's Z80 microprocessor. The card is very rare, so one can think of making a clone. There is no schematics of RamCharger, its photos show that the card was equipped with 64kB dynamic RAM and a PAL chip, which controlled the expansion. So, it seemed very hard to make a copy of the card. Fortunately, the images of the Indus CP/M system diskettes still exist (although corrupted), there is also schematics of the Indus drive available. Making a deeper analysis, one can figure out, that the memory management concept, as well as the hardware solutions which already exist in the drive allow adding the additional 64kB of memory in much simpler way than doing an exact copy of the RamCharger.

In the late 80s, LDW company (Logical Design Works) obtained rights for manufacturing a clone of the Indus GT. The drive was called LDW Super 2000 and became very popular in Poland (where it was mostly targeted). The differences between LDW and Indus are: the power circuit and Roctec's mechanism (instead of Tandon's). The rest of the electronics is the same. Although the layout of the PCB has been rearranged, the key elements for our memory extension are still there. The same applies to the CA-2001 disk drive, a later model manufactured by LDW/California Access, although in this case a small fix is to be done.

The following extension applies to Indus GT, LDW Super 2000 and CA-2001. Instead of dynamic RAM we will use static one (so SRAMCharger ;)). In case of an add-on extension card, the functioning of the drive itself is not going to be altered. There must be original firmware in the drive (version 1.20 of the ROM is required for Indus GT). Additionally, thanks to the expanded RAM, Super Synchromesh software provides track buffering.

How to get the complete extension

AtariAge user TF_HH offers ready-made, compact sized SRAMCharger extension board, more info here. It can be prepared for Indus GT disk drive, LDW Super 2000, CA2001. In case of the two latter drives you should use an extension with a straight (not angle) connector and prepare the motherboard as described below. 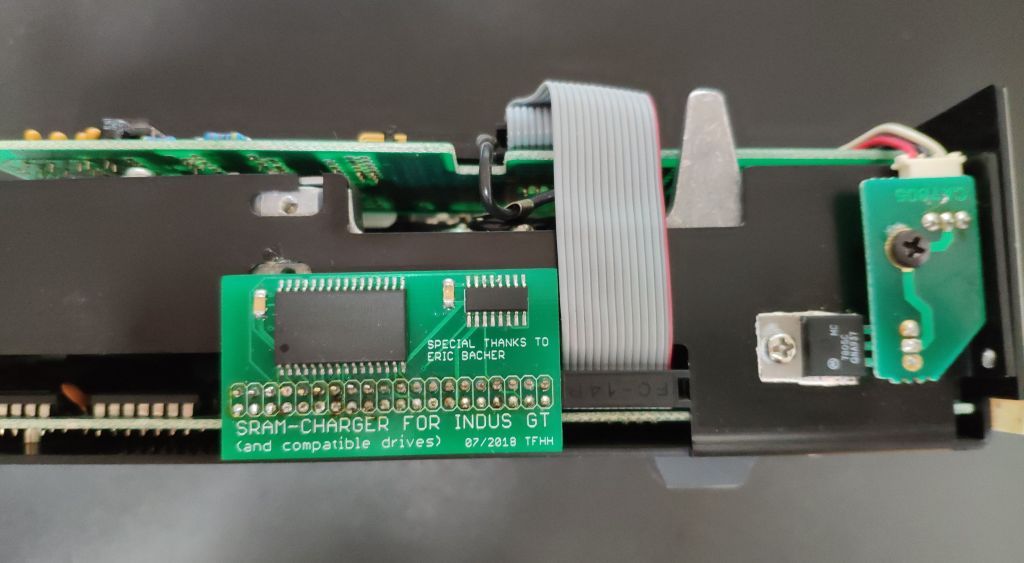 Another SRAMCharger extension (from tregare) inside a drive

How to build the SRAMCharger yourself

The additional 64kB of static memory should be managed in the following way:

Disabling of RAM and other drive chips, when the lower half of additional memory is active will be handled by the existing drive logic, but our extension should turn off the ROM with /ROMDIS signal additionally.

Signal names /BANK, /ROMDIS come from the Indus GT schematics. All needed signals are available at J3 connector, so it is possible to build the extension as an external module inserted into this connector.

Warning! There is a small mistake in the Indus GT original schematics. Signal A2 should be connected to pin 4 of J3 (not to pin 3). See indus2_corrected.gif for proper marking.

The memory extension can be achieved in a few ways. With this version, you need:

The extension should be build according to the following schematics:

SRAMCharger with one 628128 SRAM chip

The SRAMCharger can also be build around a single 128kB SRAM chip. In this case you will need:

Some have reported that chips with access times of 70ns and slower work well. However, there may be problems with faster chips (55ns).

The schematics are given below: 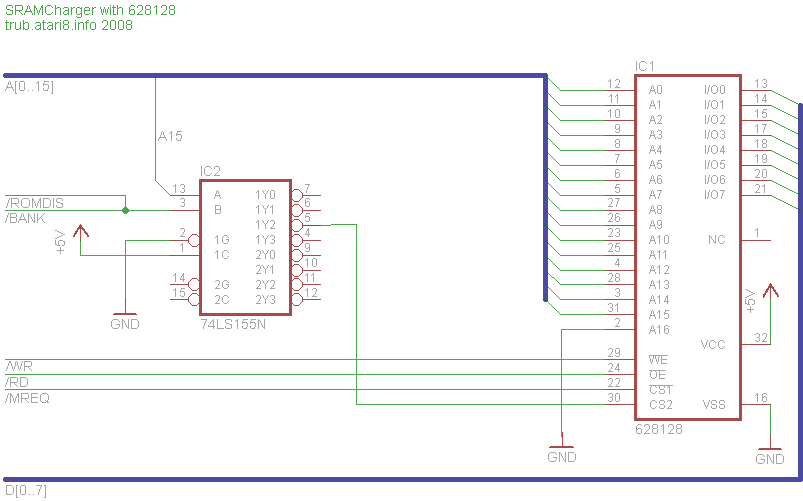 Mounting into the drive

Check if your Indus is equipped with 1.20 version of firmware (most common). You can use my CP/M TOOL for this purpose. If not, you should update it anyway.

Indus GT Service Manual (pt. 4.14): If the EPROM in the drive you are working on has a version number of 1.00 or 1.10, then it should be replaced immediately with the latest version of the device. The latest version to date is 1.20.

For Indus GT that's all, just plug the extension card into J3.

However, in some drives the J3 connector is missing (although this is very rare). If this is your case, you have to solder in a pin connector (the straight one, while LDW and CA use the angle connector).

As mentioned, the schematics of this drive is very similar to the Indus GT's one. The banking logic is already present. However, since the /ROMDIS signal is disconnected by default, we need to reconnect it by inserting the missing resistors: R57 10k and R48 4k7 (there is a place for them on the PCB) and join/cut jumpers J2, J3 accordingly.

The LDW has a placeholder for the connector J3, so we can solder in an appropriate one if we are building an add-on card. I have used two-row angle male connector. With a suitable female connector, the card fits well under the drive's cover (like the original RamCharger).

SRAMCharger prototype inside the LDW

More work is required in this case. There are different PCBs for this drive, what makes things even more complicated. First you should do similar changes as with the LDW. There is a jumper in CA-2001 which allows reconnecting /ROMDIS signal, you should also solder in two missing resistors: 10k and 4k7.

In Indus/LDW, pin 4 of 74LS138 (U9) chip is connected to A15, but in CA-2001 it is grounded (through a jumper), what disables memory banking. The jumper is located near P7 connector (equivalent of J3) on the element side, and it is connected with pin 36 of P7. You should break the jumper connection and connect (from the soldering side) pin 36 with pin 13 to get the missing A15.

Testing the extension with CP/M TOOL

Indus CP/M Tool can be used to test the SRAMCharger. The option RAMCharger check displays a firmware revision of the drive, checks for additional RAM and verifies the bank switching. The drive's display shows currently tested page of memory.

If the test succeeds, the message "RAMCharger: OK" is displayed. The drive is then ready to run Indus CP/M. If an error occurs, one of the following codes is displayed to help you identify the problem:

Thanks to jad, jer (Jerzy Sobola) and Zenon/Dial and sup8pdct for help with the page.